While poker is a fun, exciting, and enjoyable hobby, it is also a game of deliberation and strategy. A common game of poker consists of gains and losses, round after round. The first step toward achieving more gains than losses, and ultimately winning the game as a whole, is to know the poker hand rankings and poker hands odds which accompany one’s poker hands. All forms of poker revolve around hands, and all skilled players must know where their hand sits on the spectrum and what at odds their opponent’s hands are higher. 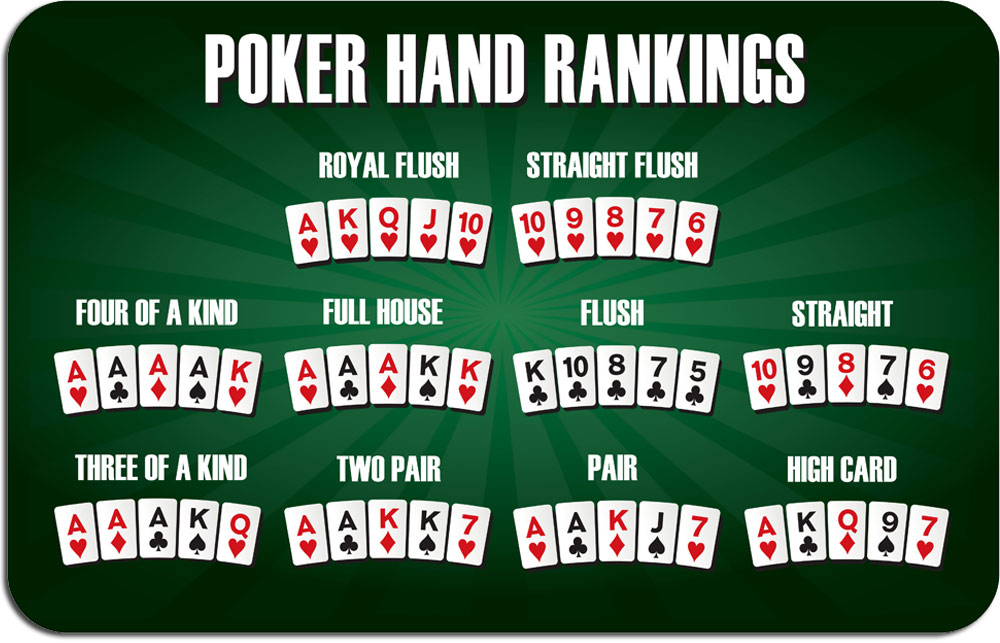 For those who are new to the wide world of poker, when the dealer distributes the round’s cards to each player, the cards the player receives is called a “poker hand”. The amount of cards each player receives and what a player can then do with those cards depends upon which variant of poker they are playing. In all forms of poker, however, a player has two basic options. They can choose to “hold” their cards, to keep them and play the round, or “fold”, which is to return their hand to the dealer and sit out the round. The importance of knowing the hand rankings and odds is fundamental from the start of the round. A player with high cards or a strong hand is far more likely to win than a player with a low cards or a weak hand, and hence, a player ought to hold a strong hand and fold a weak hand. Alternatively, a player can always “bluff” and attempt to deceive their opponents into thinking they have higher cards than what they actually have, however, bluffing is a more advanced technique utilised by experienced players. To win a round of poker, a player can bluff, or have the best cards at showdown. The option to hold or fold is present throughout the round and a player can hold their cards to assess the progression of the round first, before making a decision.

There are 4 basic varieties of poker hands: pairs, straights, flushes, and high cards. A pair is exactly what the name suggests, two cards of the same kind, for example two 10s. A straight is where the player’s hand contains sequenced cards, for example, 5, 6, 7, 8, and 9. A flush introduces the concept of the card’s suit, and 5 cards all of the same suit form a flush; for example, 5 hearts. High cards are simply where the player has a higher ranking card, for example, an ace, but it does not form any combination with the other cards in play.

The highest hands to receive are Straight Flushes and Royal Flushes. In a Straight Flush, the player’s cards are sequenced and are of the same suit, for example, 5, 6, 7, 8, and 9 of clubs.

The Royal Flush is the highest poker hand amongst all poker hand rankings and beats everything. This gold nugget of a combination refers to when a player has the royal cards, all of the same suit, in sequence; for example, a 10, Jack, Queen, King, and Ace of spades.

The general poker rankings are as follows (Highest to Lowest):

A common scenario which arises is when players have the same hand, for example, two players have a pair of kings. This is when the high card becomes important and is referred to as “The Kicker”. The player with a higher card wins, e.g. 10 high, compared to 5. Another solution to this problem revolves around the card’s suit. If both players have the same numerical high card, e.g. a 10, then the 10 of hearts out ranks a 10 of clubs, and the player with the 10 of hearts wins. If, in the rare event that both players are equally matched at showdown, the pot is split equally between the players.

The general poker suits rankings are:

It is important to note that this ranking order is general and specific variants of poker may or may not incorporate a suit ranking feature or may rank the suits in a different order.

A myriad of card games fall within the ambit of “poker”, and some poker variants adhere to specific rules regarding poker hands rankings. The general poker rankings are for “high-card” poker games, such as Texas Hold’em, or 7-Card Stud. Certain “Lowball” variants of poker exist in which the general rankings do not apply, such as Deuce-to-Seven Triple Draw, or Razz. These lowball variants adhere to their own rankings and prior to playing, a player ought to familiarise themselves with the rules of the game in order to avoid confusion and loss.

Memorising the hand rankings allows a player to concentrate on other factors during a game of poker. Poker is played against other players, rather than against the “House”, and hence, betting strategies and the analysis of other player’s movements is fundamental. Knowing your opponents is critical in this regard. A player may incur some losses initially in order to determine whether an opponent is a bluffer, or to determine their betting / playing style. Once then, a player can better assess the rounds and make informed decisions regarding whether to hold or fold.